Kobold have released the latest version of their electronic digital pressure gauge; model MAN-SC for battery powered, and model MAN-LC for 24Vdc power with IO-link.

Outwardly the two versions are similar in appearance and share most of the screen functionality features which are now accessed via capacitive Touchpads, however, depending on the application and use, each instrument version may be defined differently.  For example, the battery powered instrument defined as a Digital Pressure Gauge, while the 24Vdc version defined as a Digital Pressure Transmitter, which considering the innovative features of each version is rather simplistic, but it goes some way to define the natural application areas of the two versions.

Kobold’s previous Digital Pressure Gauge, the MAN-SD, remained in production for 23 years, proving a very robust and popular instrument.  With that record of robustness and reliability in mind, Kobold carefully developed the new MAN-SC/LC instruments, prioritising these core values, but also incorporating the wishes of customers worldwide to produce a high-quality digital pressure gauge which satisfies traditional user applications, but also reaches out to new industry sectors.

A key target requirement in Kobold’s design brief was not to exceed the retail price of the previous model, which for a new innovative electronic instrument product manufactured in Germany was not an easy task for Kobold’s production engineers, however, the retail price remains the same, and we think this offers considerable value for money in the current global marketplace. 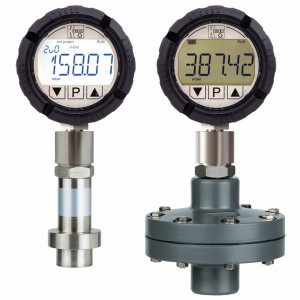 The assembly of numerous diaphragm seals is possible,
i. e. MAN-LC with DRM-189 (left) or MAN-SC with DRM-630 (right)

• The new alpha-numeric 14-segment reflective LC display screen is impressive, with a full 5-digit display, and digit height of 16mm.
• The electronic screen module can now be rotated in 90ᵒ increments; ideal for side mounted or inverted installations.
• The gauge head position can now be radially adjusted after installation for perfect positioning.
• Access to the screen options is now by capacitive Touchpads.
• An impressive range of measuring units are now accessible for selection from the programming menu, for example; kPa, MPa, bar, mbar, psi, kN, N, torr, inWC, mmWC, inHg, USR (user-defined             measuring unit), providing more options than any comparative instrument so far.
• Peak memory is featured, as is password protection, and reset to factory setting.
• Battery life with 9V Lithium is now increased to 22,500 hours (2.5 years).
• A zero (tare) function is now more easily accessible from within the menu, ideal for calibration.
• By popular request, a rubber protective case cover is now available as an option, ideal for test engineers and vulnerable areas of installation.
• Measuring ranges are now available from -1…0...+1600 Bar, which is impressive.
• The range of process connection threads has also been substantially increased and now include metric threads.  Additionally, from the options list Kobold are able to assemble diaphragm and hygienic process connections.
• Another unique application feature, only available from Kobold, is calculation of Force Value which is included in the programming menu.  This is calculated from the measured pressure value and a programmable reference area.  There are many industrial applications that will benefit from this feature but the most common request came from the construction test and safety sector for a digital pressure gauge to be included as part of the test equipment, for example, testing of anchors and fastenings in masonry and concrete to provide conformity assessments and certification in accordance with DIN EN 1090. 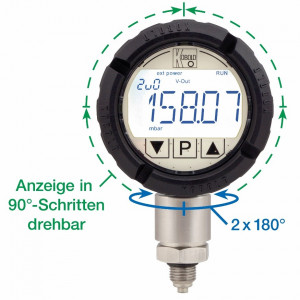 The display of the MAN-SC/-LC can be rotated at 90° intervals and
theprocess connection can be axially rotated up to 180°to the left or right,
after loosening the counter nut.

So why produce a digital pressure gauge with an integral transmitter?

The MAN-LC provides so much more than the traditional barrel style digital pressure transmitter such as Kobold’s popular PSD instrument, which followed the industry design trend for compact digital instruments. The most beneficial features of the MAN-LC are the clarity of the large digital display, and the multiple programmable features of the instrument.

The new MAN-LC model comes with IO-Link, the only Digital Pressure Gauge worldwide with IO-Link.
Many of the standard features included in the battery powered MAN-SC model are typical, however, the MAN-LC is 24Vdc powered and therefore further features are included, most noticeable when viewing the LC-display, is a backlit screen which combined with the new large display characters provides a clarity which traditional digital barrel transmitters cannot provide.

An important key feature is the inclusion of 2 x configurable outputs which always form part of a standard instrument and may readily and arbitrarily be programmed by the customer as desired. Analogue and frequency, plus alarm outputs are standard, and an optional pluggable relay module with 2x potential-free SPDT contacts is available either factory assembled, or as a retrofit kit.  This enables a customer to specify a very powerful pressure instrument specification.  Added to these features, the addition of a variety of flanged and diaphragm seal process connections extends the application reach to many industrial applications.

Kobold believe they have answered the most requested technical wishes from their customers worldwide, and in doing so, have produced a class leading digital pressure gauge/transmitter, in line with future Industry 4.0 requirements. Kobold has International sales offices and distributors who will be happy to offer support.

Other Members of the KOBOLD group

Session data such as language selection or spam protection - you can't do without it.